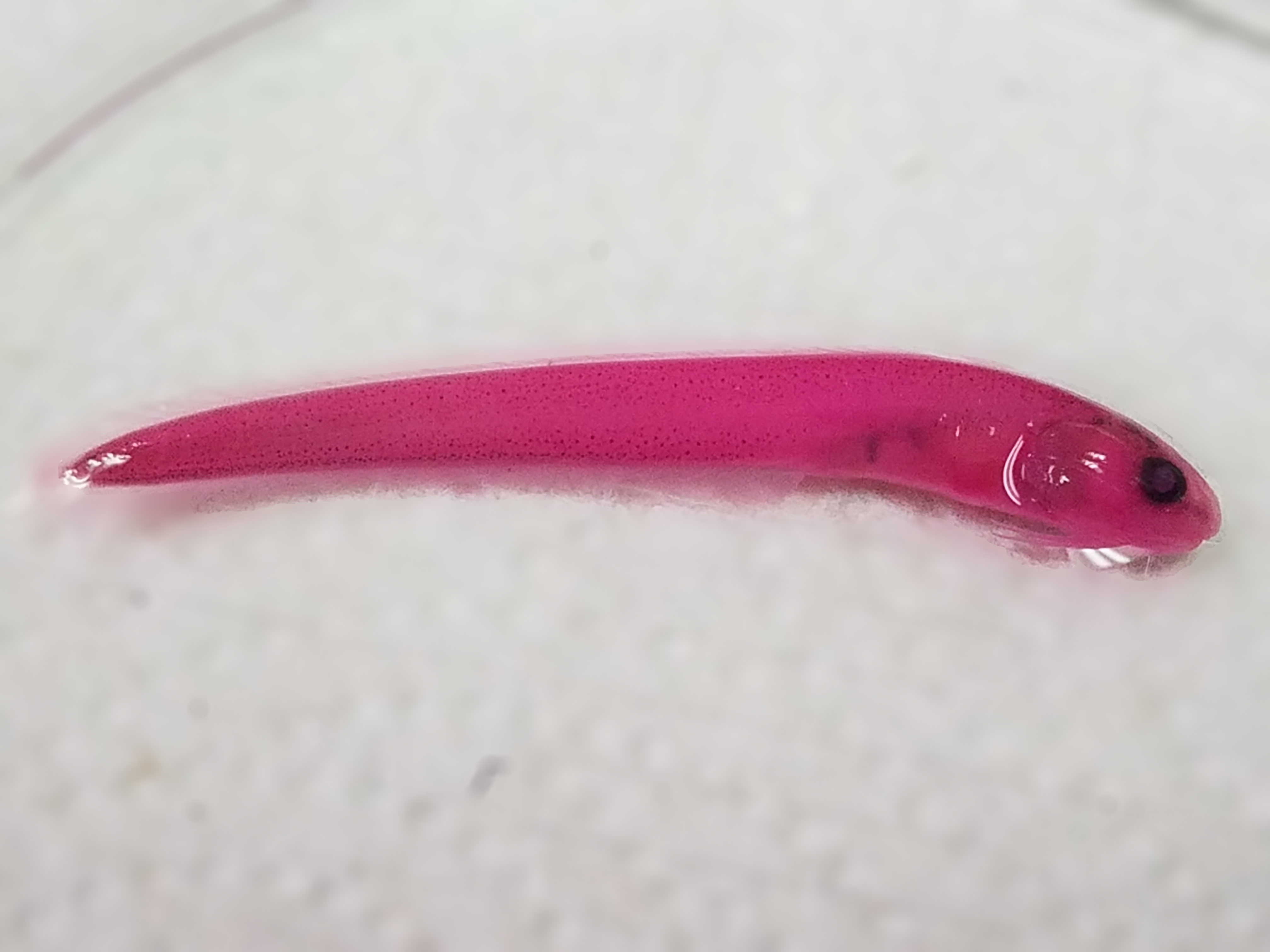 This month’s featured fish, the Striped Cusk-eel, is a strange and fascinating fish in the family Ophidiidae—the Cusk-eels, which (despite the name) arenot eels!

Striped Cusk-eels are small, bottom-loving benthic fish that grow to around 10 inches long. They have a slender body with a continuous fin (giving them their eel-like appearance) that is perfect for letting them burrow tail-first into the soft seafloor during the day to hide from predators. They come out to forage at night, and their pelvic fins (the rear fins—think pelvis) have been modified into long, thin “feelers” for probing the bottom. At first glance, these sensory structures don’t resemble fins at all and may be mistaken for barbels (like catfish whiskers), especially since they are in front of the pectoral fins (normally the front fins—think chest)! Since Striped Cusk-eels use their feelers to find things to put in their mouths, it makes sense to have them near the mouth; so they did a little anatomical re-arranging and put their pelvic fins on their chin.

These kinds of adventurous takes on anatomy are not uncommon adaptations among benthic fish. However, what is even more special is that Cusk-eels are a type of soniferous (sound-producing) fish, and have special structures dedicated to making sound! The swim bladder, muscles in the skull, and some vertebrae have been modified to let them produce a distinctive drumming sound. Sound is used during courtship and spawning, and the sound-producing structures are different in males and females. Both sexes can make sounds, but males seem to do most of the courtship crooning; adult males even grow a bump on their heads to house their drumming muscles. Striped Cusk-eels are a secretive, nocturnal species, so you’re more likely to hear one than ever see one.

Here is where it all ties in with a neat little bit of Normandeau history: If you look up the range of the Striped Cusk-eel, you will find that most sources state that they range in the Northwest Atlantic, from Florida to New York. Only rare stragglers have been seen as far north as Cape Cod, which serves as a sort of geographical boundary for the ranges of many southern species. But when a team of scientists studying soniferous fish did sound surveys near the Cape in 2001, they were amazed to find widespread breeding calls that could only belong to the Striped Cusk-eel. These were clearly no stragglers—they were heard at eight different sites, including two on the north shore. Digging through the literature, there was only a single record of a Striped Cusk-eel ever found north of Cape Cod—a paper published in 1998 by Paul Geoghegan and Joe Strube, two recently retired Normandeau scientists with decades-long legacies in marine science.

Paul and Joe’s paper about an adult Striped Cusk-eel established a northern record for the species that still stands today. The unusual circumstances of when they found the fish (well outside the time of year when southern stragglers sometimes make their way north) led them to speculate that there may be an unknown small resident population in the Gulf of Maine. And with the sound team’s discovery of a breeding population on both sides of Cape Cod, it looks like they were right!

The best part is that this story is still being told. The team studying sound at the Cape suggested, as Paul and Joe did, that there could be unknown breeding populations occurring as far north as New Hampshire waters, but they noted they that it was puzzling that Striped Cusk-eel weren’t appearing in local ichthyoplankton samples. Come back around to Normandeau who has been sampling New England waters for decades, and many years after the spawning behavior demonstrated at Cape Cod, larvae were found! The ichthyoplankton team at Normandeau found a handful in samples from northern Massachusetts between 2010-2012, and then found them again another decade later in 2021.

This is a great example of how science is often conducted—several different teams of scientists working separately over the course of decades, each building on each other and adding their own evidence to uncover the answers about a particularly secretive species.

If you want to read the articles we discussed here, you can find them online.

Soniferous Fishes of Massachusetts, by Rountree et al. (2003), can be found here: https://www.researchgate.net/publication/337991511_Soniferous_Fishes_of_Massachusetts
The First Occurrence of the Striped Cusk Eel, Ophidion marginatum  (Dekay), in the Gulf of Maine by Geoghegan et al. (1998), can be found here: https://www.jstor.org/stable/3858567
And if you want to hear a Striped Cusk-eel (and who wouldn’t?!), you can check out their courtship song here: https://soundcloud.com/rodney-rountree/love-song-of-the-cusk-eel