Traveling to Belgium for the Love of Science 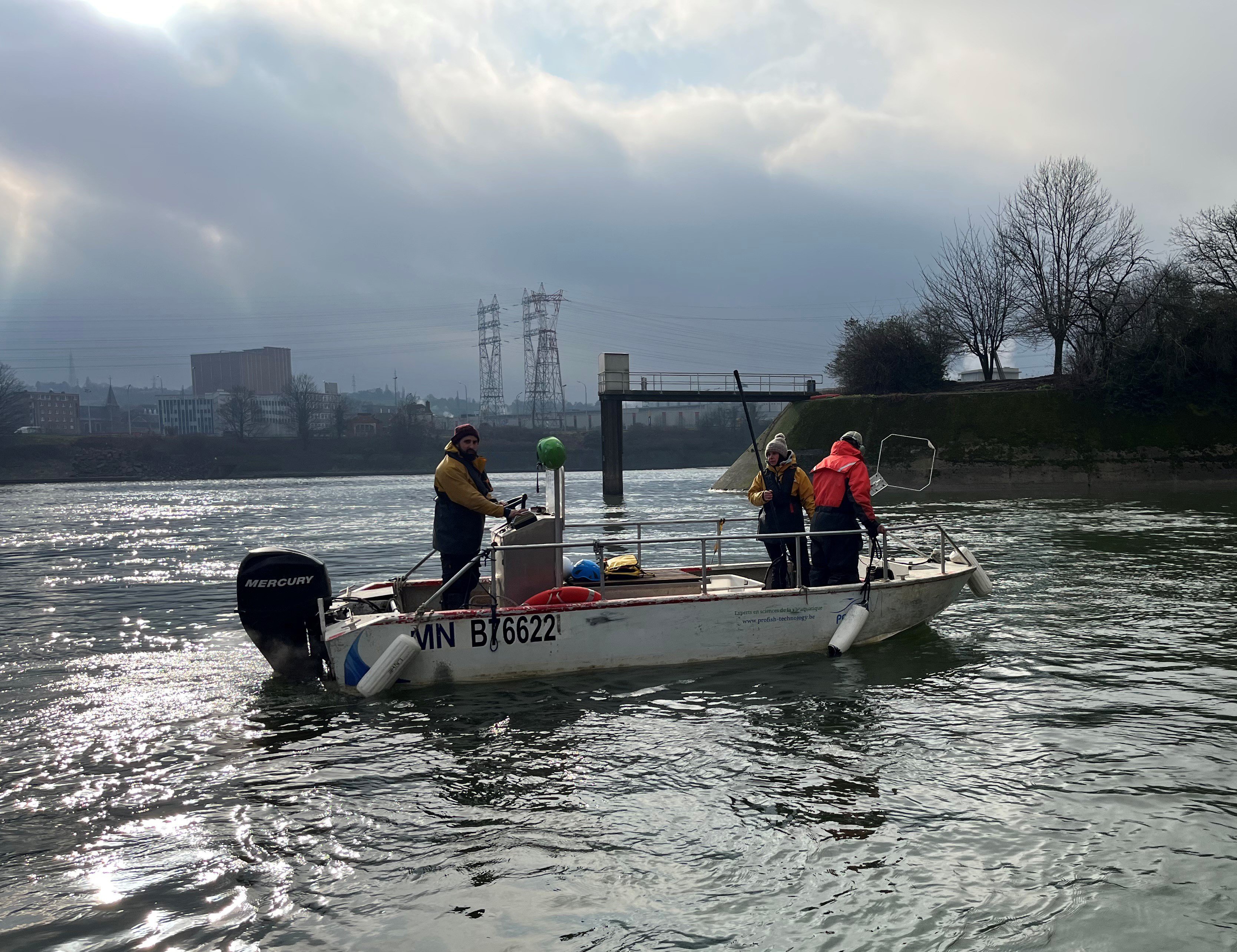 There we were—headed down a Belgian highway going 120 (don’t worry, we’re talking kilometers) in our newly rented diesel, stick shift Fiat Talento. After three years of complications from flooding in Europe, COVID preventing travel, and a difficult dance to ensure that all the testing requirements for travel were met, a team consisting of me and three other Normandeau biologists finally made it to Belgium in early January (2022) to conduct a HI-Z balloon tag study. As a result of taking an overnight flight, it was much too early to check into our hotel rooms, which we would get to know all too well over the next three and a half weeks. So, we headed into Liège to find some much needed coffee and lunch. Three of us had Boulets à la Liégeoise (Liège meatballs that come with a pepper cream sauce or a tomato-based sauce)—very tasty. 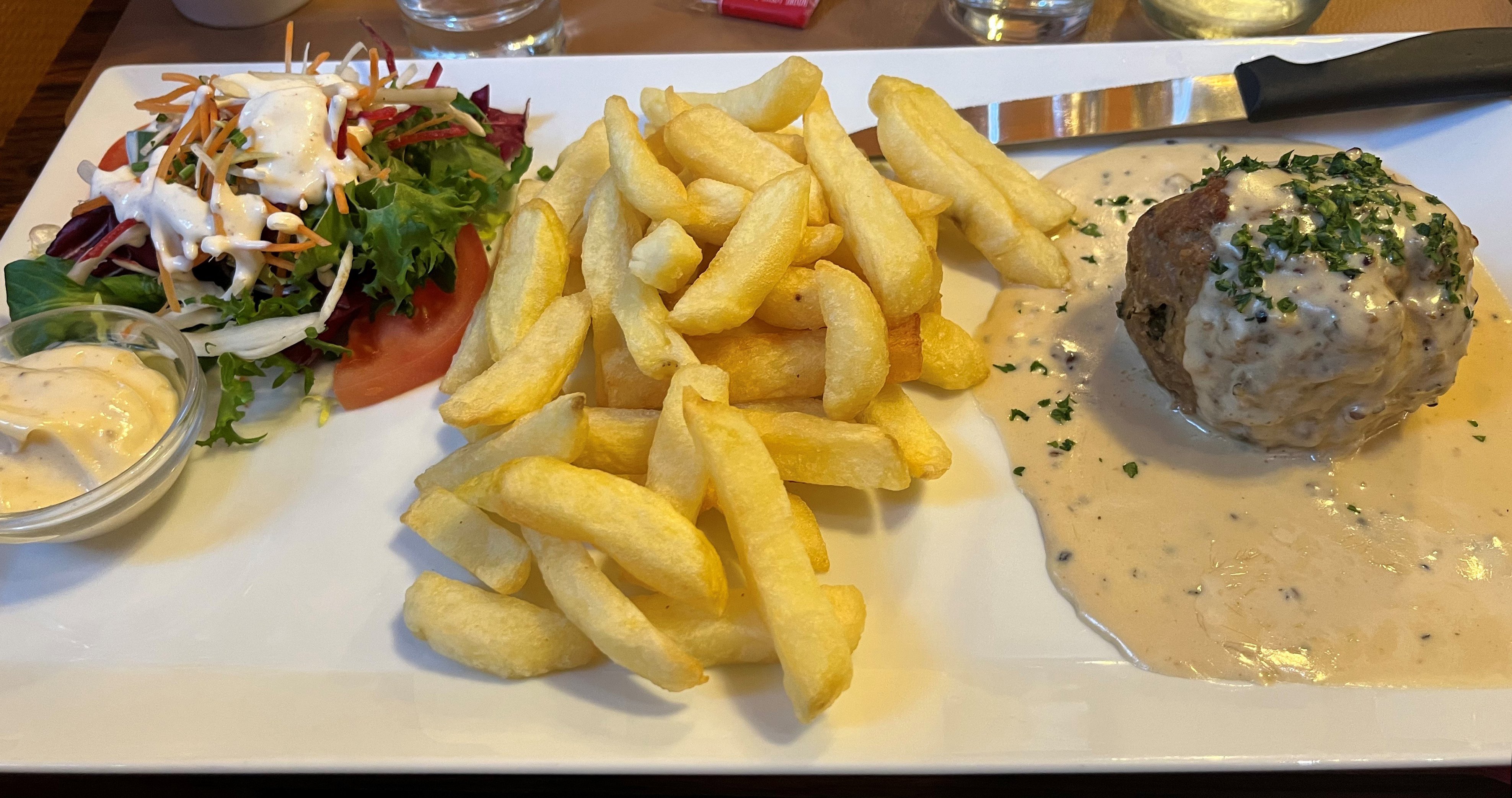 Later that evening, over a delicious Belgian Strong Ale, we waited for the rest of the project team to arrive. Our four-person team was there to supply the specialized tagging and fish tracking experience necessary for the successful execution of a HI-Z balloon tagging study. Two European organizations sent many more people to form a crew large enough to get the job done. After our first of many dinners at the hotel getting to know our new co-workers from France and Belgium, we all went to bed excited to start fieldwork the following day.

Like the start of any project, a few unforeseen issues had to be resolved before data collection could begin. The main difference when compared to other projects was that there was now a language barrier. In the southern region of Belgium, Wallonia, everyone speaks French. I took several years of French in junior high and high school, but we certainly didn’t learn phrases like “The radio signal sounds like the eel may have passed under the boat; let’s go down past the next bridge to find it.” My vocabulary had a long way to go before I was going to be very useful, so my participation in French was mostly just listening in the first couple days. Regardless, everyone did a great job communicating and we managed to get our induction systems set up so we could get started with data collection.

HI-Z tags are a proprietary technology developed originally by Paul Heisey and his cohorts at our Holtwood, PA, office. The HI-Z balloon tags are a magnificent example of just how complicated a seemingly simple problem can be. We need to be able to recover live fish after we send them through a dam. Sounds pretty simple, but we also had to ensure that anything attached to the fish would be neutrally buoyant and small enough that observed impacts could be attributable to the passage through the dam as if the fish weren’t tagged. Using this tech and some reliable methodology, we are able to control so many variables that we can directly test just about any scenario in which a fish could be injured. In my opinion, science doesn’t get much more beautiful. 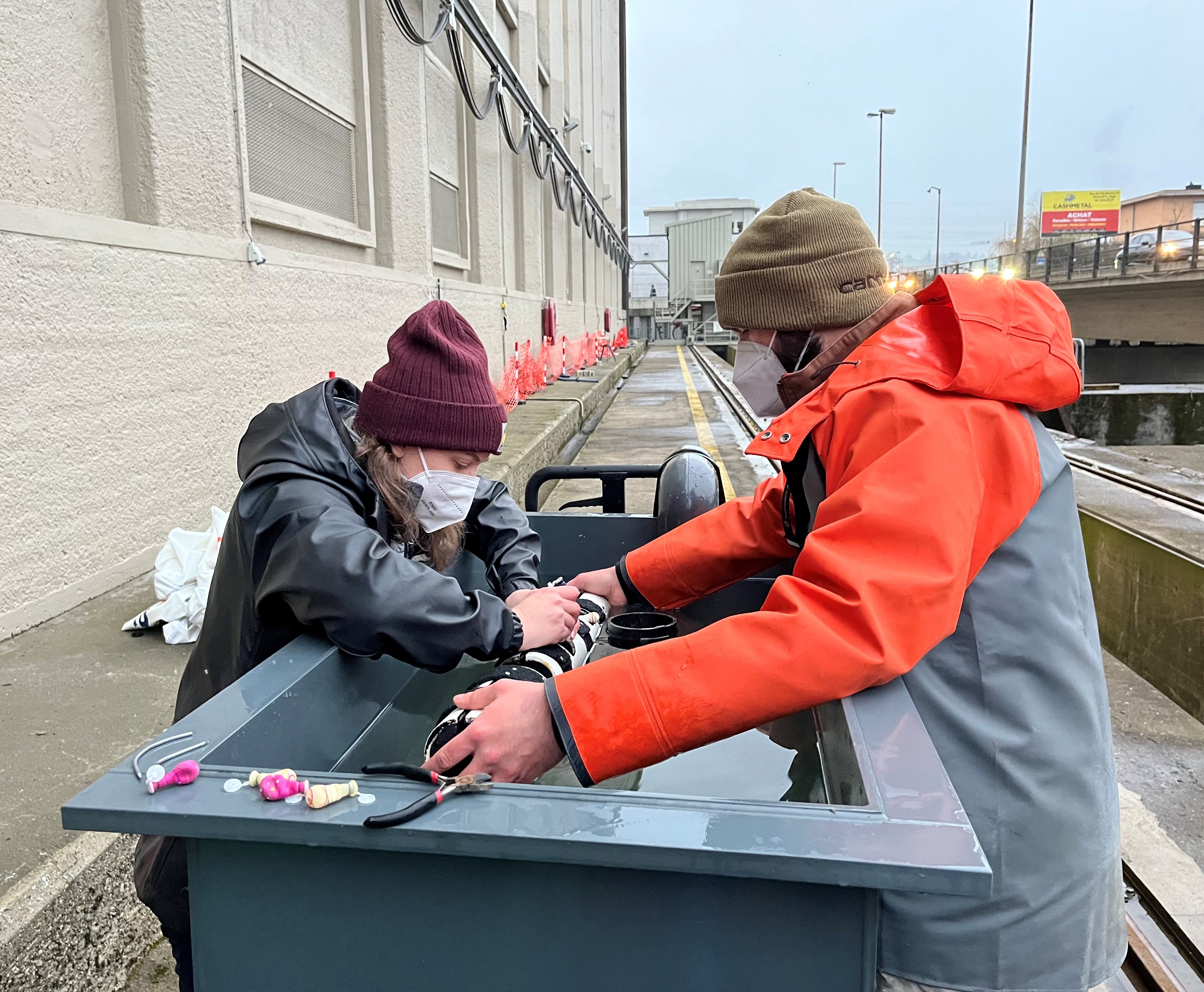 Now let’s fast forward about a week into the project. Our crew, made up of people from three countries, had really gotten into a groove. We were even communicating effectively, which is an amazing feat with two languages being spoken over handheld radios. Our final COVID requirement for being in Belgium was to get tested again on day 7. If you haven’t guessed yet, this is where things went a little bit sideways. Several of our team members tested positive. Exposure could have happened during travel, shortly after arrival, or in a seemingly innocuous interaction. Regardless, no matter how careful we had been, we now had to figure out how progress could be made on the project while a good portion of the team was in isolation. We were very lucky to have a great team of people working with us. During that first week working together, our European counterparts got up to speed enough to carry on for the remainder of the isolation period without part of the crew. Although fewer fish could be tagged daily, progress was made.

When our isolation period ended, we jumped right back in, feeling extra motivated.  Within reason, we found every opportunity to push the pace, and we were able to collect enough data to satisfy the needs of the study. Toward the end, we were really up against the clock because every day, river flows threatened to fall below the minimum required for the study. Nevertheless, we were able to get the job done and the whole team felt very accomplished.

For the last three days in Belgium, the Normandeau crew worked alone, and our French and Belgian counterparts headed home. All that was left for us to do was to conduct our delayed assessments of the eels that had been tagged during the last three days of sampling. This is an essential part of HI-Z tagging assessments because even if a fish looks ok immediately upon recapture, it doesn’t mean that there won’t be any latent effects. All eels that were alive upon recapture were then examined 72 hours later before being released. 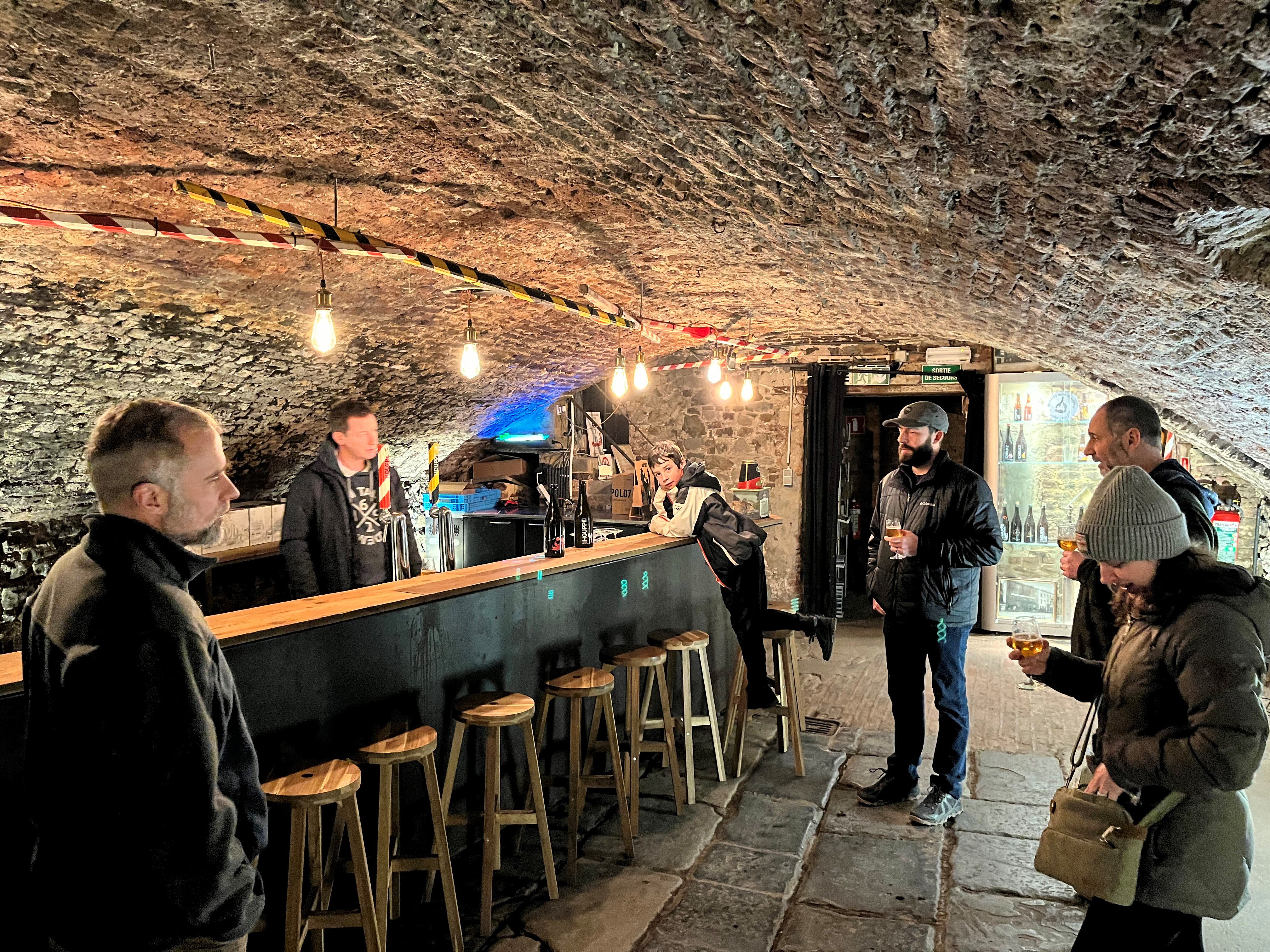 After conducting our delayed assessments every morning, we had ample time to explore Belgium a little bit more. We ventured into Liège, ate lovely Belgian food, and sampled plenty of Belgian beers. We even got a private tour of a brewery in the city of Namur because of a personal connection one of our European co-workers had. Despite the complications we faced, this is the kind of project I live for. I am massively thankful for the opportunity to travel to new places, work with interesting species, meet biologists from around the world, and create memories at work that will stay with me forever.