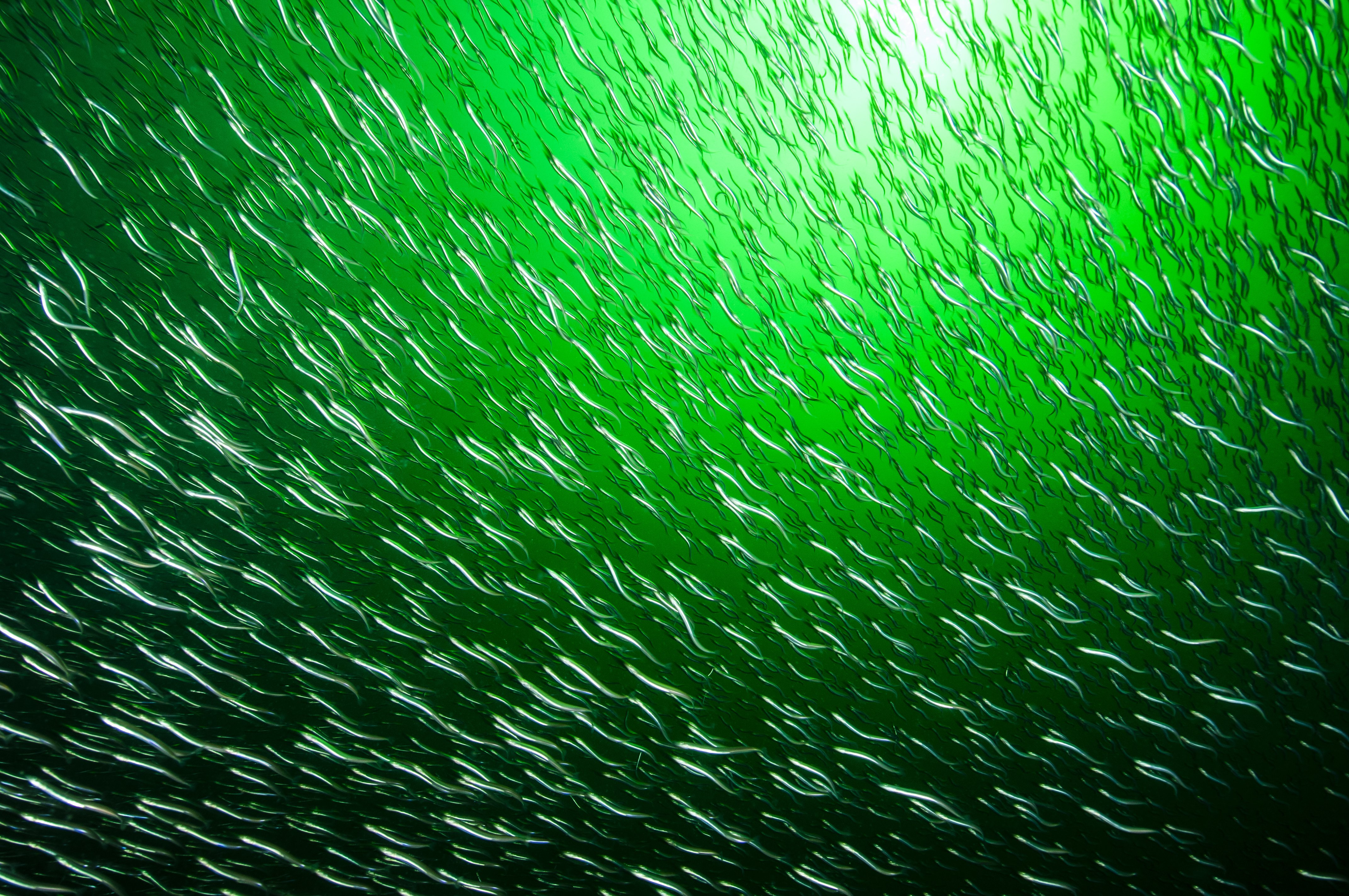 This month’s Featured Fish is one of our favorite forage fish—the Sand Lance! Forage fish (or “bait fish,” as they’re called by fishermen) are small pelagic fish that play a crucial role in marine ecosystems, and in the Gulf of Maine, the Sand Lance is one of the most important forage fish. Sometimes called sand eels (though they aren’t eels), Sand Lances are members of the family Ammodytidae, which means “sand burrower.” Their slim, elongate bodies and pointed snouts (with a wee under-bite) are evolved to help them do just that—feed in the water column during the day but spend the rest of their time burrowed into the seafloor. This fish can use its pointed snout to swim straight into the sand like an arrow or a “lance.” (We bet you can guess where it gets its name from!)

Sand Lances have a unique dual lifestyle where they sometimes act like your standard schooling fish and sometimes act like a bottom-dwelling benthic fish (or shall we say “below bottom-dwelling fish”). Like more typical benthic fish (such as flounders or sculpins), they lack a swim bladder for buoyancy, so burrowing both helps them hide from predators and lets them conserve energy when not actively feeding. Sand Lances are also toothless, which is no hardship since they feed on zooplankton: tiny, drifting animals that in turn feed on phytoplankton, the microscopic marine algae that forms the basis of the marine food chain. That’s what makes them so ecologically important: As zooplanktivores, they funnel energy from the bottom of the food web (the plankton) to the top (the predators). 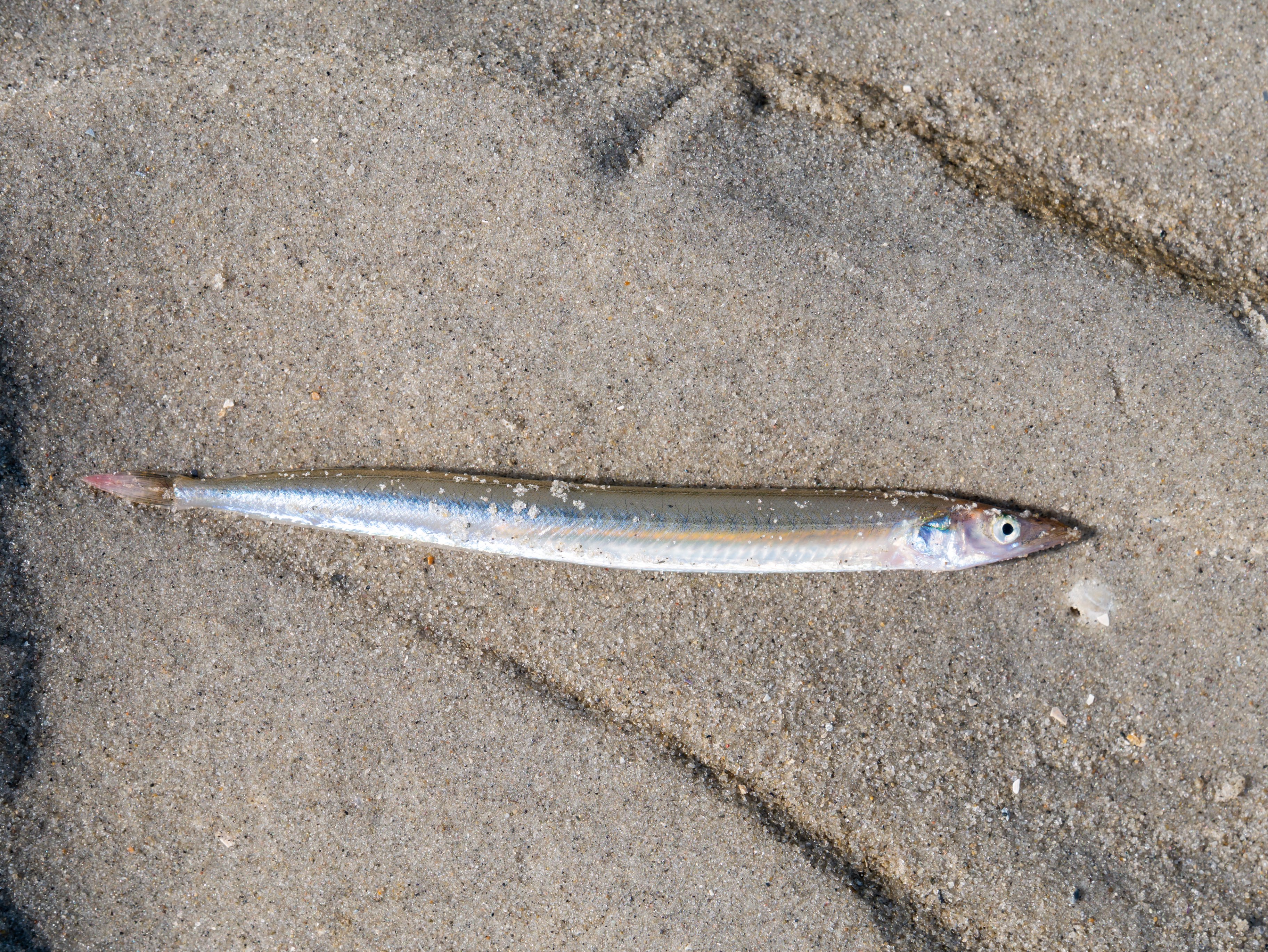 Alas for the poor Sand Lance, everything loves to eat them! In the Northwest Atlantic, they’re preyed on by over 72 species of predators, comprising 45 fish, 2 squid, 16 seabirds, and 9 marine mammals—including baleen whales! Sand Lances are an important food source for several endangered species like the Roseate tern, Atlantic Sturgeon, and grey seal. They’re a particular favorite of Humpback whales, who love them so much they’ll roll on the seafloor at night to shake them out of their sandy hiding spots.

The Sand Lances we see in New England are usually around 3 to 6 inches long. They prefer loose, coarse sand for burrowing and inhabit shallower coastal waters as opposed to the deep sea (where they would have trouble reaching the bottom). Sometimes they even burrow in the intertidal zone—the part of the coastline that gets exposed to air during low tide. They’re able to survive for at least five and a half hours sitting in nothing more than damp sand!

This special species is a hot topic for research right now as scientists realize how little we know about an animal that plays such a big ecological role. To find out more (and see a cool video of a Sand Lance darting into the sand) visit the Woods Hole Oceanographic Institution’s website at https://www.whoi.edu/news-insights/content/now-you-see-me-now-you-dont/