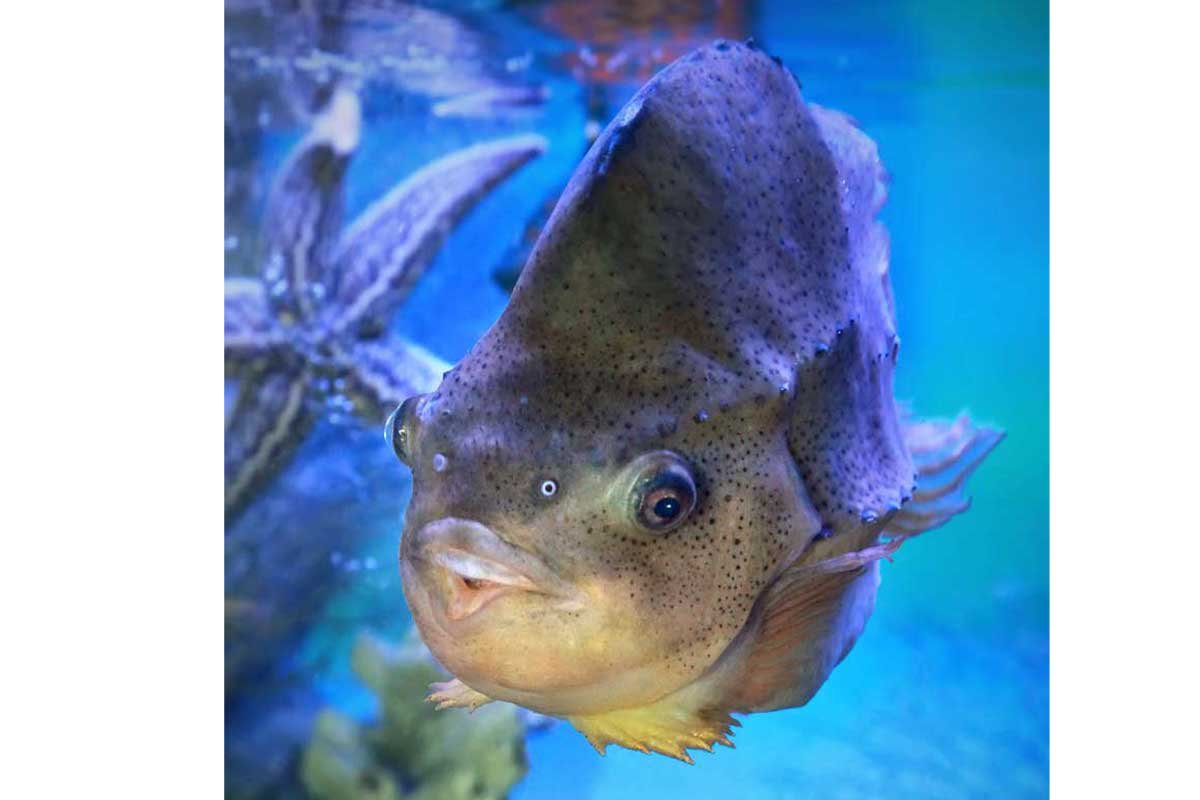 Cyclopterus lumpus: say it out loud; it’s kind of fun. We’ve chosen the humble Lumpfish (aka Lumpsucker) as our featured fish—continuing with our “ugdorable” theme. (See the last ugdorable featured fish article on the Northern Stargazer.)

Ok, so why the name Lumpsucker? Well, it is kind of literal. This little beauty has a number of features that make it so distinctive and earn it the name. Maybe we should say big beauty because our local Lumpsucker is the biggest of the bunch with females growing to 55 cm (the largest recorded was 21 pounds). Other members of this family like the Pacific Spiny Lumpsucker (Eumicrotremus orbis) only grow to be 2.5 cm. The “sucker” part of its name comes from the modified pectoral fins that really do make a little suction cup on its belly. They use this cup to stick to things—rocks, seaweed, algae, each other, and anything else nearby when their fat little bodies need a rest. And they are fat; all those lumps and bumps on their bodies are created by layers of fat under their skin. As you can imagine, they aren’t really great at swimming around and tend to rest on surfaces during the day, like a lump. I guess you can take your pick on where the lump part of the name comes from (so many options).

Lumpfish don’t have a swimbladder, so they don’t have to deal with unwanted buoyancy (a plus when you want to spend your time on the bottom of the ocean). Recent research with Lumpfish trackers (hey, it’s a thing) indicate they like to spend their time up in the water column at night when they are adults (after they have grown out of some of that baby fat).

Lumpfish are a commercial fish in places like Iceland and Greenland where their meat is eaten and their eggs are used as a cheap version of caviar. Some Salmon farms are also using them as cleaner fish because they will eat parasites off of other fish.

Our local Lumpfish (Cyclopterus lumpus) are large and dull gray (most of the time). However, when males are in the mood to get frisky, they put on their party outfit and hit the town. Males turn a bright orange when they are ready to breed. (Other Lumpfish species like the Balloon Lumpfish come in red and yellow.) Males build a swanky pad (nest) and entice females over to lay their eggs. Once eggs are laid, the male guards them and fans them with water to keep them oxygenated. This is a really handy time to have a suction cup because he can plant himself right next to the eggs—sort of like a dad in his easy chair in front of a football game—and not much is going to budge him.

Very few of the fish we encounter in our projects come with suction cups (though there are a couple), which makes this fish easy to identify. And while Lumpfish are not much of a concern for our clients (they aren’t endangered, good for eating, or good for angling in the United States), they are still a species of interest to us.