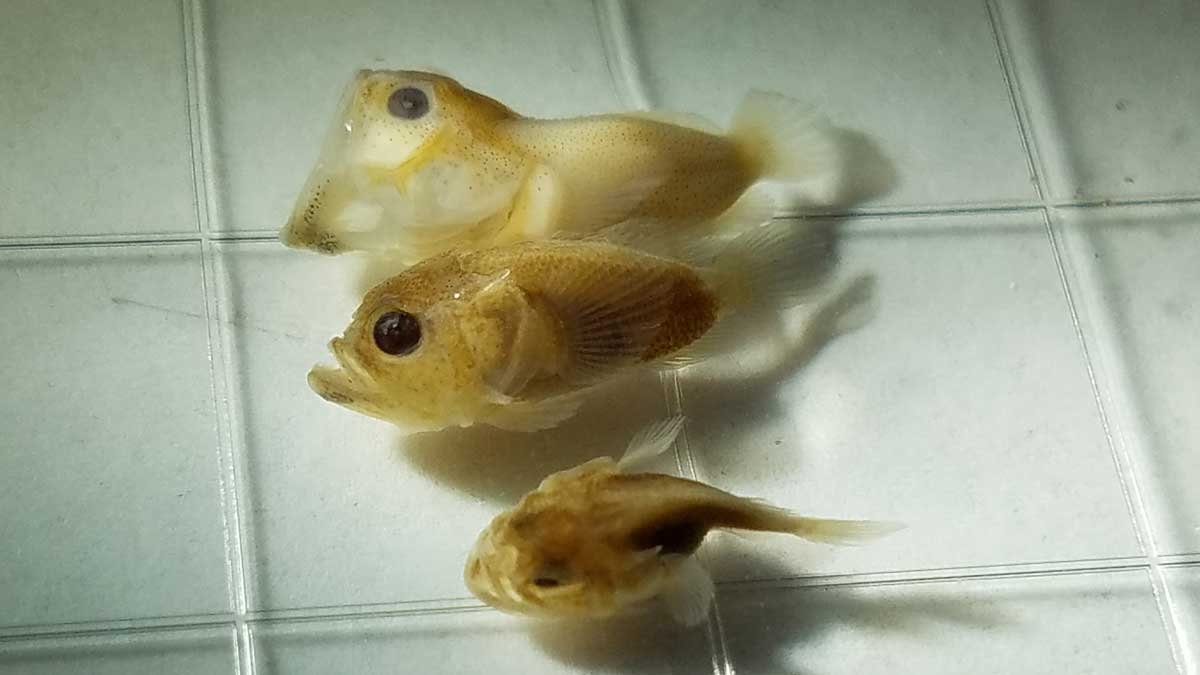 Meet the Northern Stargazer (Astroscopus guttatus), a fish with a beautiful name but a face only a mother could love! These fish live along the East Coast from New York to North Carolina. We’ve seen several of these guys in our Hudson River and Chesapeake Bay projects. Adults can reach over 1.5 feet in length, but the Bedford Ichthyoplankton team typically sees them when they are much smaller, at only 10-20 mm, or still in the egg.

Why is it called a Stargazer? Because its eyes are positioned on the top of its head, looking straight up. Stargazers, like flounder, start off life with their eyes on the sides of their head: It’s not until they grow up a bit that their eyes migrate to the top of the head. Its scientific name means “speckled one who aims at the stars,” but really this fish isn’t doing any stargazing—it’s looking for a tasty meal! A Stargazer buries itself in the sand, using its front fins to dig itself in, leaving only the eyes and the top of the head exposed. Its body coloration, the speckling, lets it blend right in with the background and the “stargazing” eyes let it watch for prey while it’s hidden. By wiggling its gills and even rotating its eyes it can attract small fish to its hiding spot. Talk about a come hither stare—these guys can rotate their orbits to mimic a small prey item wriggling in the sand. A quick burst of speed and a chomp and dinner is served!

Hold on to your socks though—this fishy wonder has an even greater trick hidden up its sleeve (or fin as the case may be). These fish are electric! While you may think of eels or even rays when you think of electric fish, the Stargazer has them beat. While not as powerful as those other fish, the Stargazer has electric eyes. Yes, that’s right—this fish has electric eye beams! (These guys may be primed to be the best supervillains ever!) The electric charge is produced in the muscles around its eyes. The Stargazer’s discharge is used when feeding and may confuse prey as they are being sucked into its gaping maw. Alternatively, the electric shock may also be used to deter predators. But don’t be concerned, the discharge is pretty mild and probably not strong enough to actually stun its prey, let alone a human. The Stargazer is an ugly fish with a pretty name and superpowers: That’s why it’s our Fish of the Month.