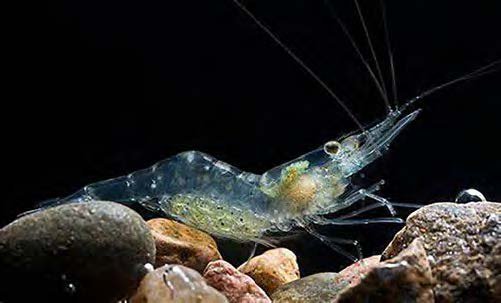 This edition’s “Bug-of-the-Month” is a Decapod in the genus Palaemonetes (commonly referred to as the freshwater prawn, fresh­water shrimp, or grass shrimp), a member of the familiar crayfish order Decapoda, which translates into “ten feet.” This is in reference to one of four types of legs found on all members of this order. Although closely related to crayfish, prawns are completely shrimp-like in appearance. What is interesting about them is that they rep­resent a freshwater analog to marine shrimp, an environment where there are exceedingly more species than what are found in fresh­water. It is always interesting to find a freshwater version within a group that is almost exclusively marine. For example, there is a freshwater polychaete worm called Manayunkia (one of our previ­ous Bugs-of-the-Month), there is a freshwater jellyfish, and there is a freshwater sponge.

Our specimen came from a sample collected from a small coastal plain stream called Devils Brook. The sample was collected by a watershed association called The Watershed Institute, which administers a monitoring program near Pennington, New Jersey.

One of the more interesting characteristics of the decapods is the number of different kinds of legs they have and the degree of specialization for each. Up front are the maxillipeds, which function like the mouth parts of most crustaceans. Prawns are omnivorous and use maxillipeds to handle and mince their food, as well as to clean their antennae. Along the thorax are five pairs of what are called pereiopods, or “walking legs.” The first of these are chelate (adapted for grasping prey) and the remaining four are used for locomotion. This is where the “ten feet” name comes in. On the abdomen are five more pairs of what are called pleopods, or “swim­merets,” which (as implied by the name) are used to swim through the water and by the females to hold and incubate their eggs. The last two legs form the “tail fan” of the prawn and are called uropods. These are flattened appendages that give prawns the ability to escape predators by swiftly darting backward.

So, freshwater shrimp can move by walking along bottom, steadily swimming, or darting through the water.