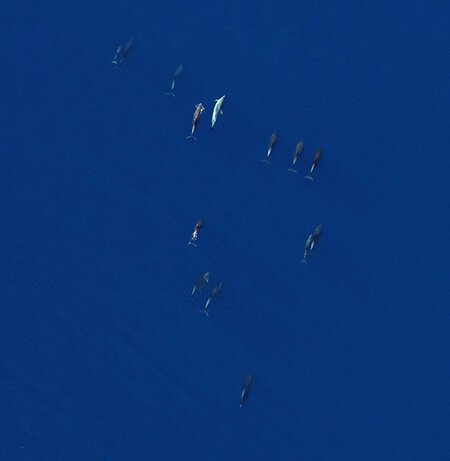 The world's largest and most detailed digital aerial surveys of offshore wildlife have begun off the coast of New York state and have already captured remarkable images of birds, whales, dolphins, sharks, sea turtles, and fish.

The surveys will cover an area of 16,000 square miles-larger than the state of Maryland-and will capture almost 4 million ultrahigh resolution images.

The 3-year study is being carried out by Normandeau Associates, Inc. and APEM Ltd on behalf of the New York State Energy Research and Development Authority (NYSERDA) as part of the recently launched New York State Offshore Wind Blueprint. NYSERDA is obtaining this regional-scale baseline information on seasonal wildlife distribution, abundance and movement to inform responsible offshore wind site selection and development. The survey will provide a better understanding of the potential effects of individual offshore wind projects, as well as any possible cumulative effects of multiple projects. The project is expected to expedite offshore wind development, decreasing uncertainty and reducing costs for ratepayers while minimizing wildlife impacts and maximizing environmental benefits. The study will provide important baseline data as the State pursues ambitious plans to secure 50% of its electricity supply from renewable sources by 2030.

The surveys are also gathering the highest resolution images ever for a project of this scale. Detailed images of a wide range of species have already been captured during the first summer survey. They include sharks circling large shoals of fish, a female dolphin with its calf, dense shoals of rays, sea turtles, and large numbers of individual sharks, including a huge basking shark. Bird species have also been identified, including shearwaters, bald eagle, double-crested cormorant, petrels, gulls, and terns. Analysis of images from the recently completed fall survey has been initiated.

A website https://remote.normandeau.com/nys_overview.php developed by Normandeau for the project allows the public to see exactly where different animals have been recorded.

Julia Robinson Willmott, project technical director for Normandeau, said "It will be very interesting to see the natural fluctuations in animal density and distribution during the 3 years of this project. In addition to the animals targeted in the study, we are mapping fish shoals and boats, because we want to get as much information from the data as possible."

"The beauty of this survey method is that you can revisit the data as often as you need to glean any additional information that hadn''''t been previously identified as a priority."

"The image quality is astounding. The calm sea conditions on some of the survey days make the subsurface animals look like they''re floating in air not in water. They''re that clear."

Christian Newman, president of APEM''s U.S. office, said "The images are amazing and we are cataloguing a diverse array of wildlife species over a wide area, with a coverage and definition that has never before been achieved in the United States or anywhere else in the world.

"We set up the system so that each pixel corresponds to 1.5 centimeters on the ground. This allows us to identify the species for an extremely high percentage of the birds and marine animals in the images."

To cover such a large area the team designed two different survey methods. A transect based approach over the larger planning area uses aircraft flying in parallel lines and provides a broad scale characterization of the New York Bight offshore planning area.

The second survey method provides greater detail of the proposed wind energy area. It employs a grid-based flight pattern that allows more accurate estimates of the numbers and distribution of wildlife. This creates greater siting, permitting, and monitoring certainty and meets the regulatory guidelines for pre- and postconstruction monitoring in the United States.

Ann Pembroke, vice president at Normandeau, said "By reviewing image quality daily we are able to ensure that the area is surveyed to consistently high standards, providing confidence in the data collected on behalf of NYSERDA as they consider the appropriate use of the Offshore Planning Area."

APEM is carrying out the surveys. The images are analyzed by experts at Normandeau and APEM to identify birds and other marine species.

Normandeau is a leading U.S. environmental and regulatory consulting firm with special expertise in developing innovative technology solutions for answering biological questions. APEM is the world''s leading supplier of aerial bird and marine mammal surveys for the offshore renewables industry, having carried out over 1000 surveys. The two companies have been working closely together for over 5 years.

The surveys will be conducted four times per year over 3 years in coordination with visual surveys planned by other New York state and federal entities.